Make the internet safer for your kids with ScrubIT...

This solution is suitable for parents who can't afford to buy the "net nanny" product. No installation is required.

What is ScrubIT?
ScrubIT is a FREE recursive DNS server that regulates what comes into your home or business. ScrubIT “scrubs” the internet so you don’t have to be concerned about what your family members or employees will be confronted with.

Who should use it?
ScrubIT is perfect for any home or business that is tired of the plague of pornographic and malicious websites.

Why is it FREE?
You're saying "Where's the catch?", good news, there is none! As far as we know, ScrubIT is the only public recursive DNS server to actively filter pornography. It’s a FREE service provided by people who care about the freedom found in the internet, but balance those sentiments with a desire to protect our children and employees.

*Summary were copied partially from ScrubIT website.
Posted by dirn at 2:21:00 PM No comments: Links to this post

1) Install GNOME Shell and gnome-tweak-tool, then restart your machine and choose GNOME for your session
2) Install Cantarell font
3) Gnome-tweak-tool settings 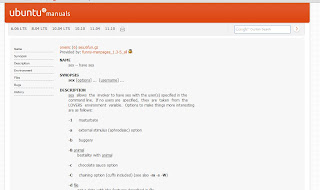 DESCRIPTION
sex allows the invoker to have sex with the user(s) specified in the
command line. If no users are specified, they are taken from the
LOVERS environment variable. Options to make things more interesting
are as follows:

-B animal
bestiality with animal

-d file
get a date with the features described in file

-e exhibitionism (image sent to all machines on the net)

There's so much discussions going on regarding GNOME Shell and Unity. People talked as if the world is going to end soon (okay, I'm a little bit exaggerate here :)). I had this kind of impression after read too much negative posts / comments related to the DEs. Agreed on Unity, after tested it for sometimes, I got to admit that I myself hate it as well.

But GNOME Shell, is a different story, after play it for a while (OpenSuse LiveCD) I found out that it's quite nice. Things like "super key + type app name + enter" and dynamic desktop switcher (predefined number of desktops are not required) was kinda cool. It might feel odd at the beginning when my working and activities (I believe that's how they defined it) mode are separated into two (no launchers or list of applications visible on your desktop unless if you're in the activities mode). But after sometimes, I got used to it. It'll be great if I can interact with objects using keyboard in "Activities" mode. As of now (at the time of writing this post), things like opening apps or selecting existing windows can only be done via mouse clicking.

Of course I still love my current desktop with GNOME 2 (Shell is the core user interface of the GNOME desktop environment starting with version 3). It'll be great if I can customize GNOME Shell to look like my current desktop. It is possible to customize GNOME Shell (via gnome-tweak-tool) but only to certain extend. Things that I'll miss a lot from GNOME 2 are effects from Compiz (since GNOME shell is using Mutter for window compositing and won't work with Compiz), especially desktop cube. It's kind of an unofficial trademark that when others saw the desktop with cube, they knew it's Linux (or at least the idea is from Linux when they saw it on Windows).

I hate the idea of sharing the same interface into multiple devices as well. That seems to be the direction taken by tech companies (MS included) nowadays. Luckily for Linux users, we can change our DE to our liking (or at least the best to our liking). That's the beauty of it, and that's one of the main reason I've learned basic Linux (apart from freeing myself from virus, malware, crapware etc). Yes, I know there's no such thing as secure OS, but at least my mind is at peace when using it.
Posted by dirn at 5:21:00 PM No comments: Links to this post